Both of Tulkoff’s facilities are SQF Certified. 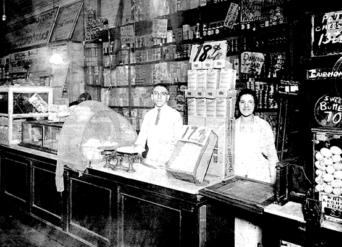 Founders Harry and Lena Tulkoff in their Baltimore, MD store 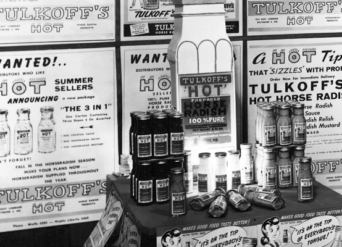 Harry and Lena Tulkoff with daughter Bernice at a 1940s tradeshow featuring the still popular Horseradish and Garlic. 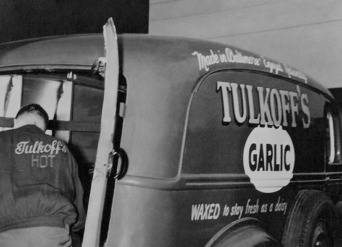 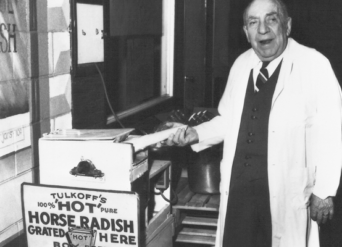 Founder Harry Tulkoff poses with the original root grater used in the 1930s.

Second generation owners, Sol and Marty Tulkoff, demonstrate the quality of their Horseradish at a 1950s show. 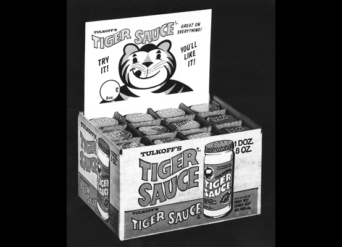 Many remember Sol Tulkoff for wearing his tiger jacket to tradeshows and business meetings. Tulkoff's infamous tiger stripes were popping up everywhere. Even on their shipping trucks! Sol Tulkoff stands outside of Tulkoff's Baltimore, MD headquarters in the 1960s.

In the 1930’s, Harry and Lena Tulkoff started a family business in the town of Baltimore, Maryland. The Tulkoff’s ran a produce stand, selling fruits and vegetables to caterers. Over time, as their business grew, one product garnered the attention and liking of clients and consumers alike – their prepared horseradish. Due to demand and popularity, Harry and Lena decided to solely concentrate on producing horseradish products. Soon thereafter, the Tulkoff Horseradish Products Company was formed and on its way to becoming one of the nation’s largest food manufacturers of horseradish products.

Over the following decades, Tulkoff grew as a food distributor, officially changing its name to Tulkoff Food Products, Inc., and expanded its product line and distribution network, carrying out the same vision of quality and personal attention that Harry and Lena found so important. Products such as Tiger Horseradish Sauce and Cocktail Sauce were natural progressions for Tulkoff, using their famous horseradish as an ingredient. Today, Tulkoff’s product selection also includes, flavored sauces, garlics, garlic spreads, butters & sauces, ginger and herbed sauces.

In 1997, as the business continued to grow, Tulkoff acquired a second plant in Pittsburg, California to support the national needs of consumers. In the first quarter of 2008, Tulkoff Food Products headquarters and east coast manufacturing plant moved into a brand new, state of the art facility while remaining in Baltimore, MD, where the company first started. This facility was built to better serve customers, as well as explore new culinary possibilities as a food manufacturer.

In 2020 Tulkoff closed it’s California location, but acquired a manufacturing facility in Cincinnati, OH. Production in Ohio commenced at the end of 2020/early 2021.

To read an in-depth history of Tulkoff by decade, click here.